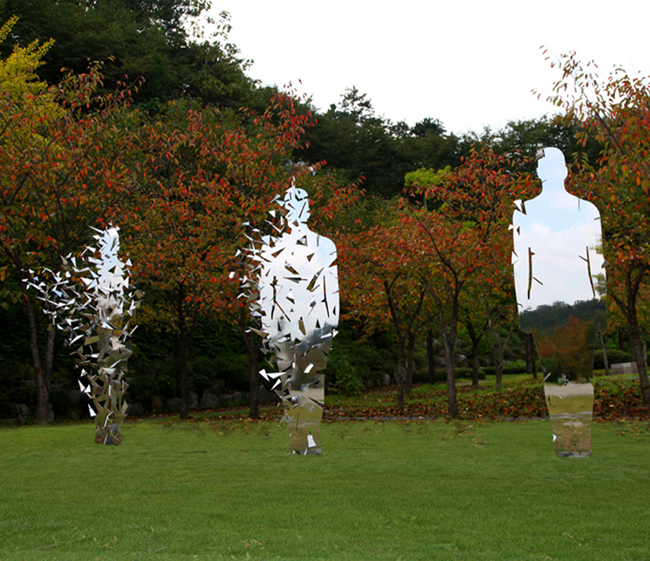 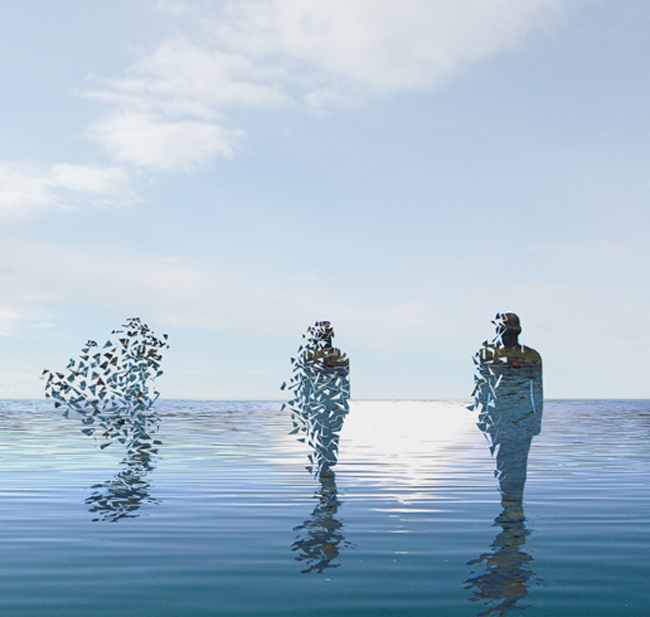 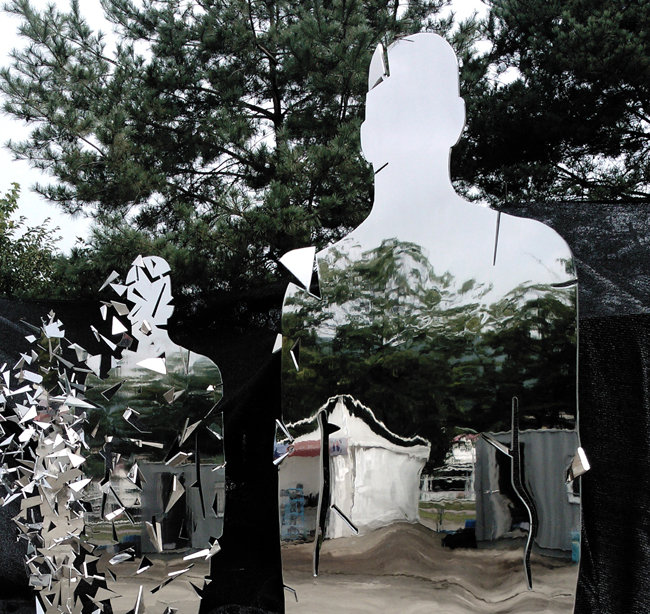 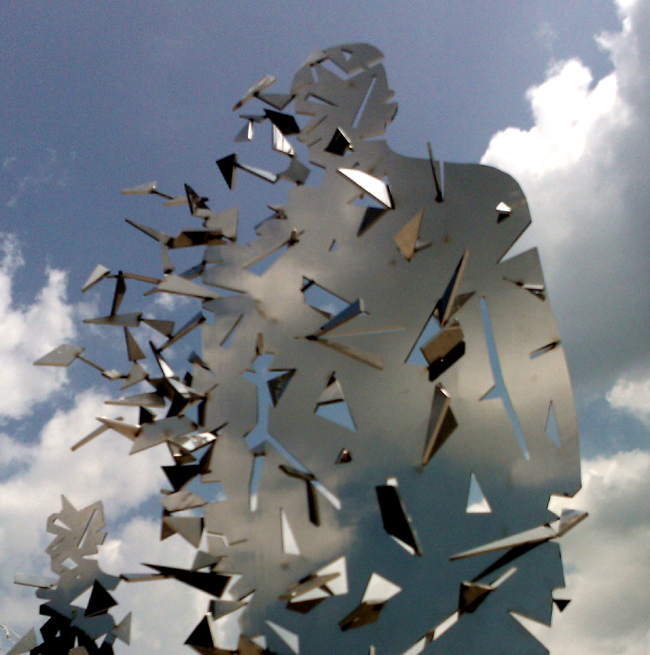 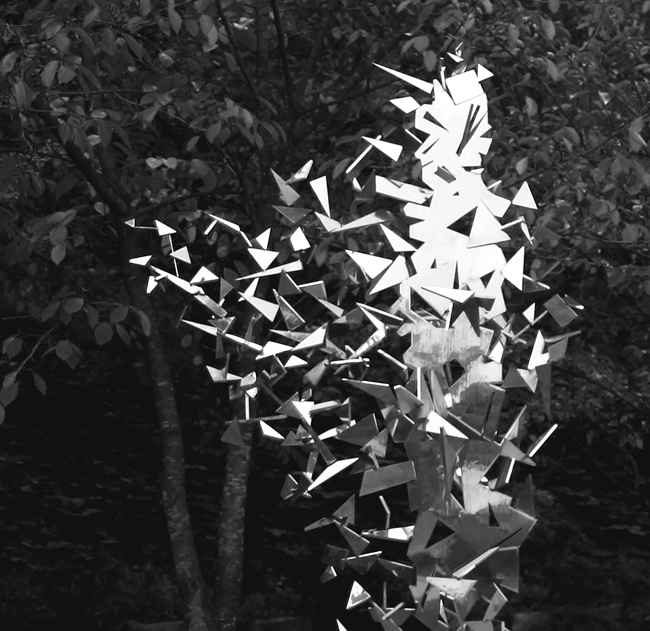 Transmigration
Icheon City
Korea
Medium : Polished 316L stainless steel
Dimensions : 2.8 metres high
Rob was invited to submit a site specific proposal by the selection committee of the 17th Icheon International Sculpture Symposium. Five International and four Korean artists were selected to create new sculptures for a permanent exhibition in Seolbong Park in August 2014.
This permanent sculpture installation is inspired by the multi – faith belief in the migration of the human soul. 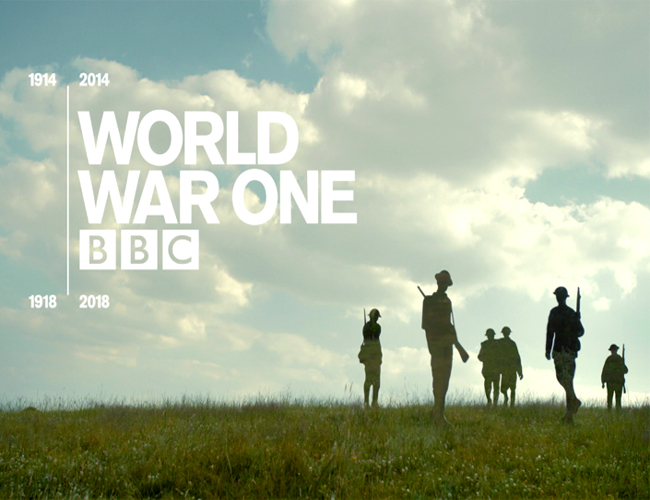 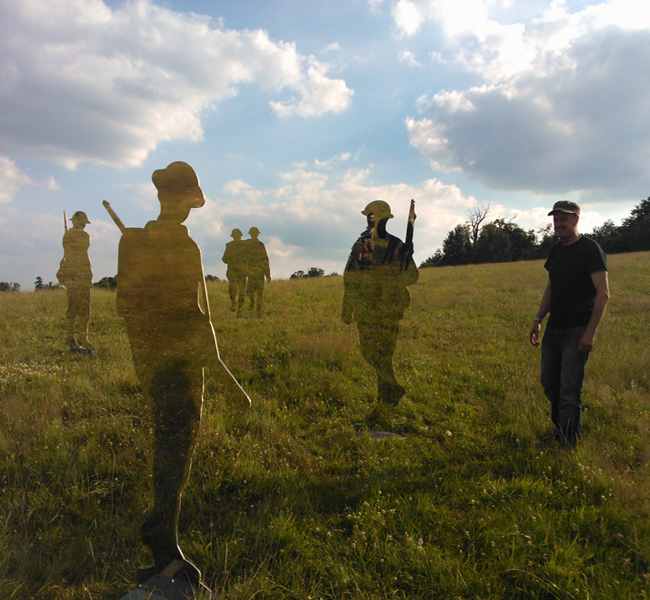 BBC First World War Commission 2014
England UK
Medium : Polished stainless steel
Dimensions : 1.8 metres high
In the spring of 2014 Rob was approached by Red Bee Media Ltd to create an art installation to commemorate the centenary of the First World War. This would be filmed to create a trailer for BBC First World War documentaries.
In collaboration with creative directors Tom Woodington and Robin Temple of Karmarama, Rob developed a group of six mirrored figures representing the Tommie’s returning home after the war.
The aim was to capture the comradeship and reflective mood of the soldiers returning home after the noise and horror they had endured at the front. Their ethereal presence aimed to create a vestige of their mark on the landscape, a moment in time captured and envisaged a century later.
The VT trailer will be used to introduce various BBC documentaries commemorating the war. 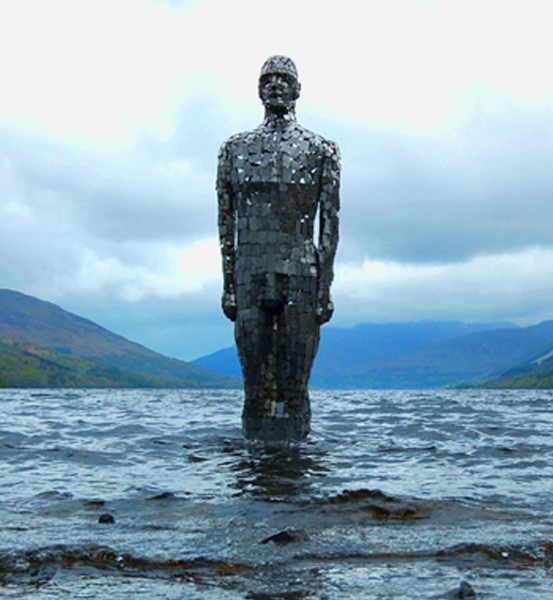 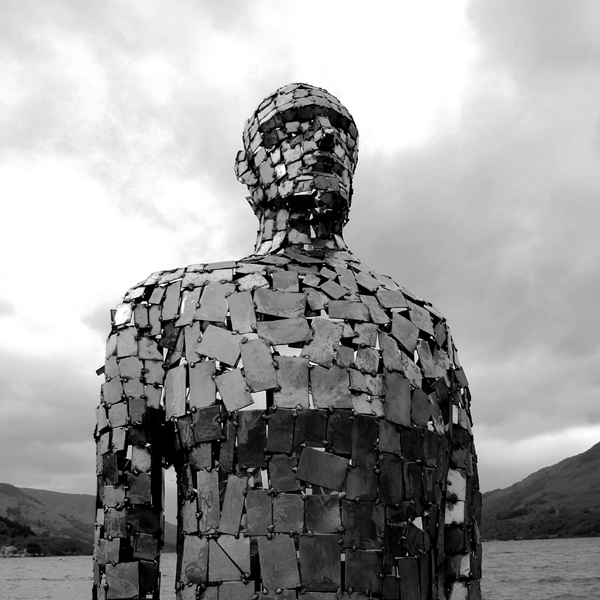 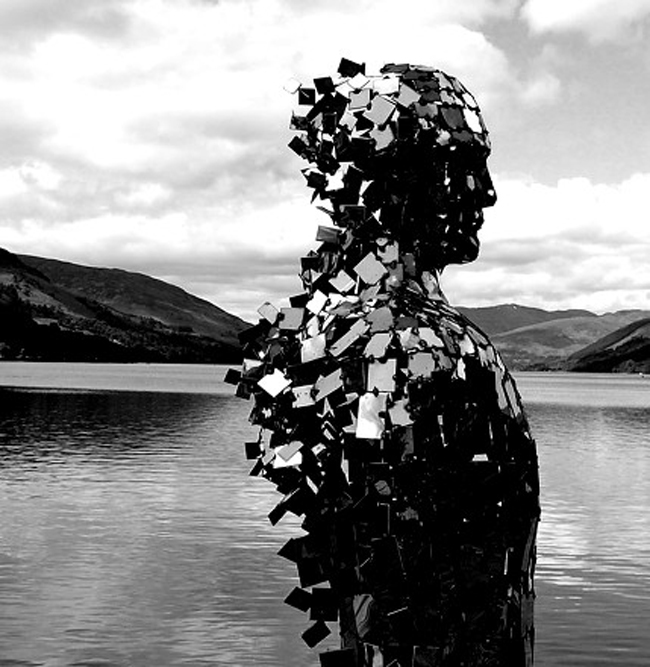 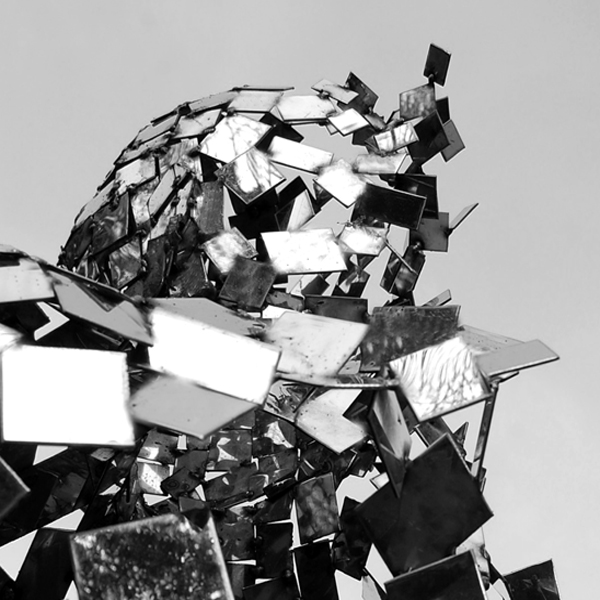 
The solitary figure of Still stands at the head of a Loch Earn. The figure symbolises the physical and spiritual relationship between humans and the natural wilderness. The figure is in constant flux; the small panels that form the sculpture are being torn away with the prevailing wind, re-shaped by the natural forces. Still investigates the fundamental aspects of self awareness and our connection with our environment. 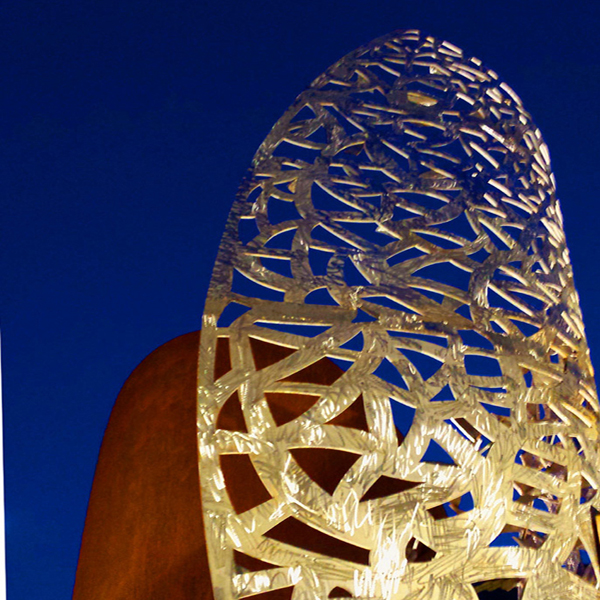 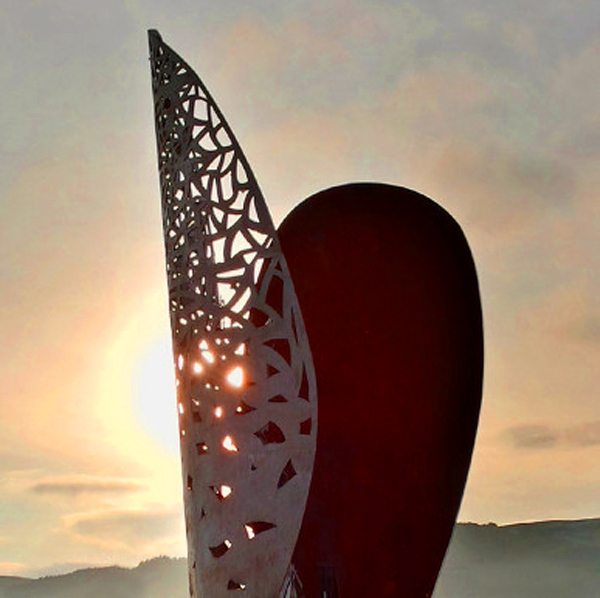 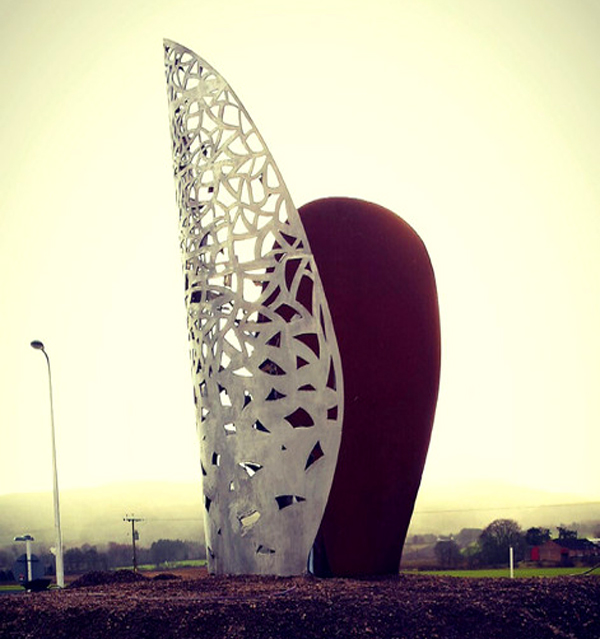 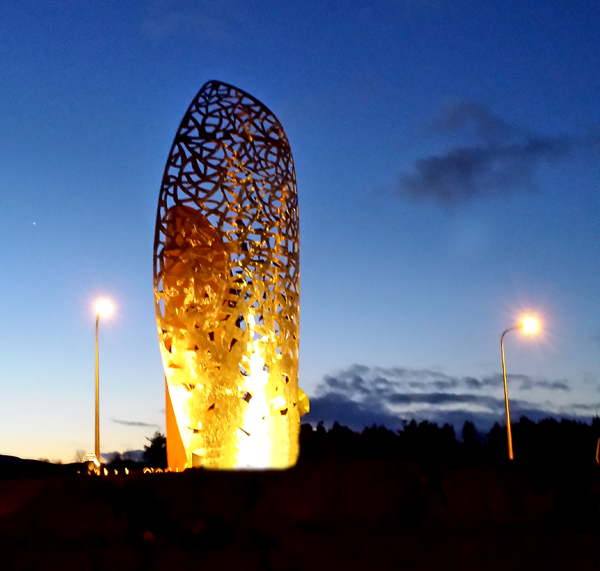 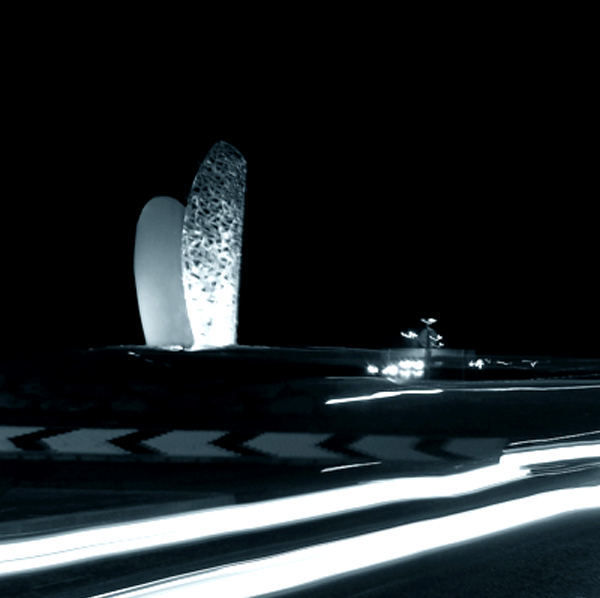 The sculpture was commissioned to create a distinct and recognisable landmark at the entrance to the new settlement at Oudenarde, Bridge of Earn in Perthshire, Scotland.

The aim of the sculpture is to engender a ‘sense of place’ and a distinct identity for the new settlement. The construction of this new development will be undertaken in several key phases over the next ten years and it was important that the sculpture possessed a timeless quality of design.  The COR -TEN steel structure is based on a seed form, representing the seeds of growth and emergence. The stainless steel section of the sculpture is abstracted from a leaf form as it de-constructs, representing the cycle of natural life, growth and re-generation.The overall objective was to create a form that was in congress with it’s natural settings, conveying the fragility and complexity of nature. 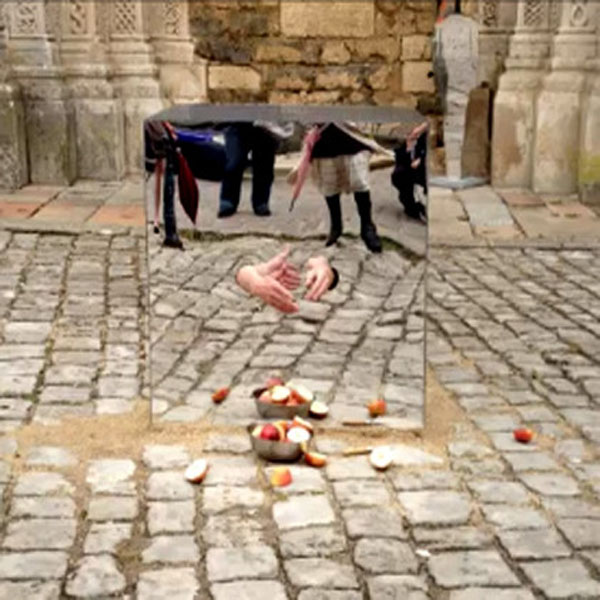 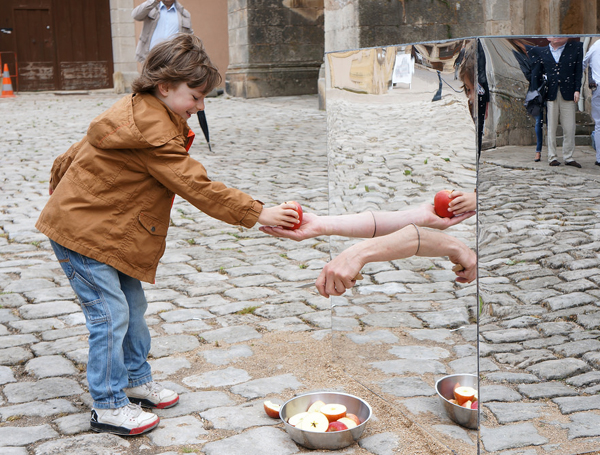 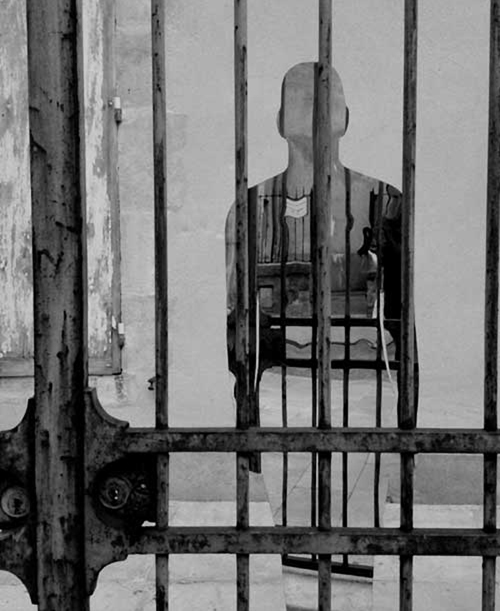 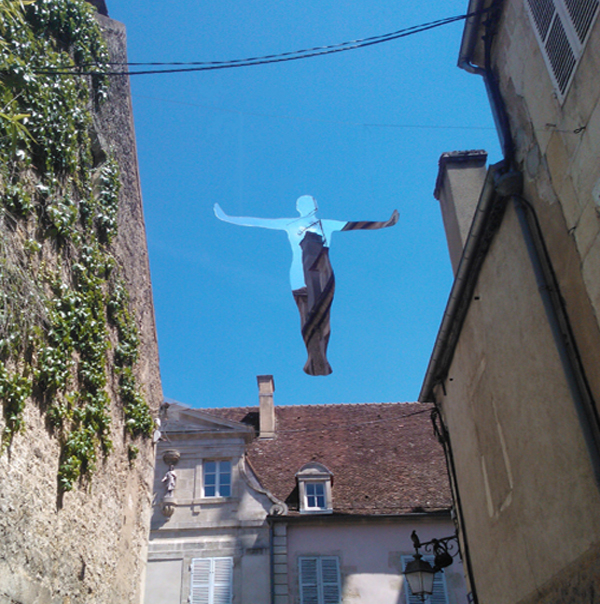 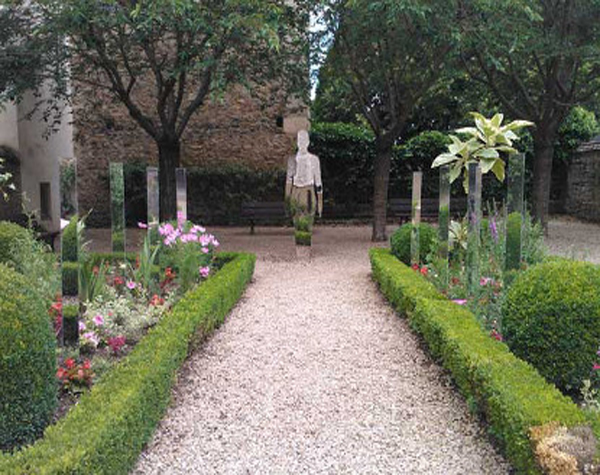 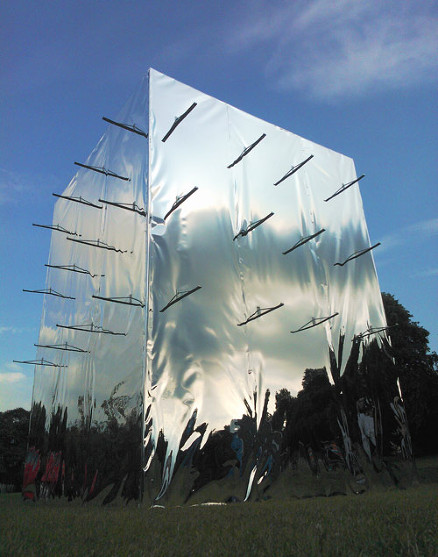 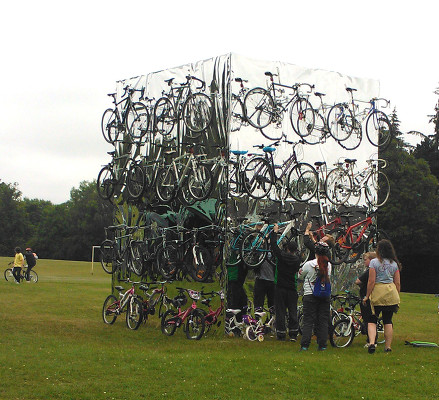 Bike Cube
Glasgow
Medium : mirrored plastic, wood This community sculpture project was a collaboration between Rob and Healthy n Happy, a Community Development Trust that promotes core well-being and health initiatives in Cambuslang and Rutherglen, near Glasgow.  As part of their Bike Town launch, Rob conceived a sculptural platform that would allow the community to help build the sculpture.
The main concept was to encourage people in the community to cycle to Cambuslang Park and add their bikes to the sculpture. This participation was a pivotal aspect of the project, allowing the whole community to participate in creating the artwork.
From timber batons and sheets of plywood, the sculpture was gradually assembled with the help of local volunteers. The tower, almost five metres high, was then covered in mirrored film and fitted with bike hooks on all four sides.  It was a very engaging process and it was fascinating to watch the sculpture emerge in the centre of the park over the four days of the project.